All known Krithis of Sadashiva Brahmendra with english translation 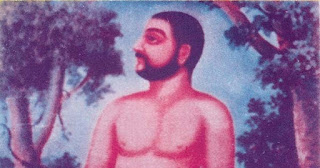 All  known compositions of Sadashiva  Brahmendra

I am reproducing    the particulars of the Sadashiva Bramendra’s   Krithis from  http://satyasense.blogspot.in/2010/02/sadasiva-brahmendra-compositions.html  in Table 1.My humble acknowledgements to  Sri Sathya. The  particulars  given  are   well researched. I have completed the translation  of these 24  Krithis  in to English.  Table 2  gives  the urls   where  my English  transliteration and translation of these  Krithis is available

Posted by Raja Thatha at 4:23 AM No comments:

Charanam
1.Sing about Gopala , who was sung about by Kuchela, Who is the basis of three worlds and killer of the sons of dithi(Asuras).

3.He who destroys the bad ones and keeps away the tainted ones, He whose son is Madhana and he who is the killer of Madhu.

4.He who gives heaven to his devotees, he who is the son of Nanda, He who killed Chanura and is the resting place of sages.
Posted by Raja Thatha at 2:58 AM No comments: